My New Year’s Eve included third wheelin’ it to dinner with my parents, baking snickerdoodle blondies for the restaurant crew and then delivering them in exchange for a margarita and watching Davey the Hubbers cook for other people until the ball dropped, and I was rewarded with a smoocheroo. We went straight to bed and enjoyed a New Year’s Day filled with yoga, hanging new blinds, bowling and playing the game of Things. All in all, I’m really pleased to see what 2014 is serving up so far.

And speaking of serving up (heeey, how’d ya like that segue??), here’s what’ll be happening in our kitchen this month (minus yesterday, which I missed): 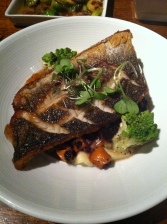