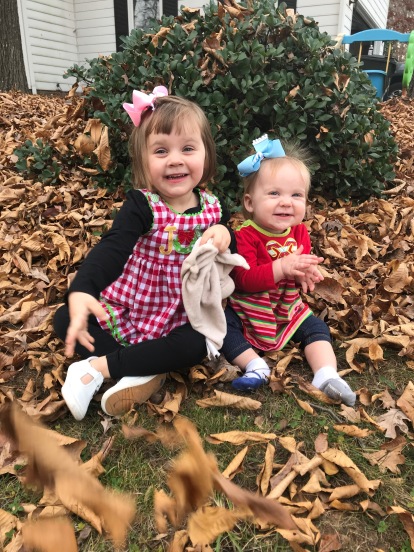 We have been overwhelmed with the well wishes following our news that we’re expecting baby #3! Frankly, I needed to announce it so it would start to feel more real to me. I still can’t quite believe that I’m pregnant. With a human baby.

Unlike our first 2 babies, this little bean was a total shock. Never have I ever believed that pregnancies could actually be surprises, but give me a fork and let me eat my words.

For a brief timeline: After having Nora Beth following 2 years of trying without success and a successful round of IUI, I got my cycle back at 6 weeks postpartum. It regulated almost regularly, and we started trying to give her a sibling. I found out I was pregnant when she was 8 months old, but at our 8 week old ultrasound we learned that instead of a baby, I had a blighted ovum. I don’t think I have ever felt anything as crushing as those weeks of waiting to miscarry.

We decided to go back to REACH in January of 2016 to begin a new regimen of IUI, and after 3 attempts, we learned that we were expecting our darling Annablair. Following her birth, I resumed my cycle around 8 weeks postpartum, and it wasn’t quite as regular as after Nora Beth, but it was regular enough… somewhere in a span of 28-31 days.

In early October I was diagnosed with ovarian cysts and sent for an ultrasound to make sure they looked safe. As I was lying on the table, I thought to myself, “Huh. How funny would that be if I were pregnant right now.” Of course, that wasn’t the case (or so I thought), and we looked at my cysts, measured them, and I was scheduled for a follow up ultrasound 6 weeks later to check their size.

About a week after that ultrasound I was sitting at one of my clients’ offices texting with a friend who was hoping for a positive test that month. She was late and feeling hopeful. I started calculating my cycle and realized that I was at day 32. Late by my usual standards, but I chalked it up to breastfeeding and told myself not to think about it. But, of course, as I sat at my desk writing content, I started thinking about it. My supply had suddenly dipped, I was still having some pain from cysts, annnnnd I realized that I had a pregnancy test sitting in my car (because who doesn’t?). I darted down to the parking lot to grab it and sneaked into our bathroom promising myself not to even mention it to David. 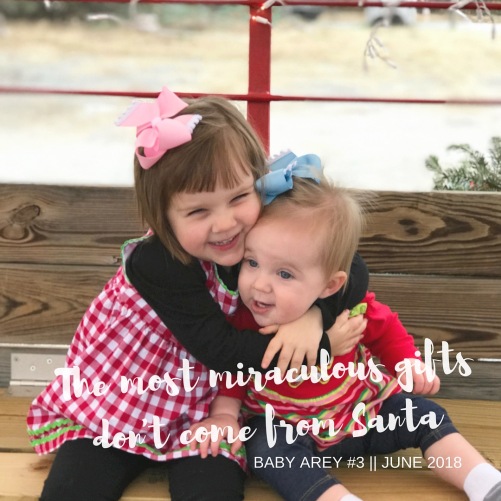 As I was in the middle of taking the test, though, David called me to report back on Annablair’s tube pre-op appointment. Still vowing not to mention what I was doing, I nonchalantly listened while taking a look at my test. Which was a blaring positive. I immediately started shaking and interrupted Davey, squeaking out, “Ummmm, hey. I think I have to tell you something? Umm, I think I’m pregnant? Well, like, I am. I literally just peed on a test, and it’s really really positive. I’m sorry to tell you like this! Hang on, I just need to send you a picture.”

I honestly had no idea what to do next, so I followed what any other rational human being would think to do and capped the test, shoved it into my pants and walked back to my office and sat down at my desk and started typing. But I was shaking and couldn’t stop laughing. They probably thought I was drunk.

But I was a little confused about what to do next. With the girls, we had very clear next steps following our IUI, and I actually knew I was pregnant before it registered on a home test. With our miscarriage, my body did all of the proper pregnancy “things,” tricking me for 8 weeks before my OB confirmed that my body was a sneaky bitch. I knew that waiting that long wasn’t an option.

I immediately called my OB to schedule my typical first visit, but my next call was to REACH. I told our nurse what had happened, still in a haze of disbelief, and I requested a blood test, so I could know what my HCG was measuring. They were so kind to humor my request, and the next morning I went in for the blood test. I learned later that day that it was a rousing 2,453 (for context: my first blood test with NB was only 12 HCG and Annablair was 90 HCG). I was THRILLED. Butttt also still concerned. My body knew what to do, but did that mean it was producing a baby?

Almost immediately thick, heavy nausea descended, and again, I was thrilled, but cautiously so. I’d been here before. I went the next week to my OB who further encouraged me that the nausea was a good sign (but I’d had it with my blighted ovum) and scheduled an ultrasound for 8 weeks. That felt like an eternity for my frail nerves, so I hopped in the car and made another call to REACH. They had been able to do ultrasounds with the girls at 6 weeks, and I was desperate to see what was happening in my womb. I knew that looking that early could reassure me OR worry me further. It’s a gamble whether or not you can see a heartbeat then and rare to hear it, but Nora Beth and Annablair had allowed us to do both. Again, REACH graciously scheduled an ultrasound for me 72 hours later. Maybe the longest 72 hours of my life. I had convinced myself that this was a hysterical pregnancy and spent hours Googling. Maybe my HCG was TOO high. Maybe I was TOO nauseous. But I wanted to know early rather than wait… in hopes of what? Not being hurt again?

I was a shaking disaster as I walked into REACH with my mom. We were called back, and the PA came in to start the ultrasound. IMMEDIATELY I could see the gestational sac and the yolk sac. It was the yolk sac I sought out first. It’s what was missing from my second pregnancy. Just a sad, void hole in my uterus. But there it was. And I next started searching for a flickering heartbeat. And there it was. Tiny but full of life. We weren’t able to hear it, but I was assured that was okay. I left encouraged, but it wasn’t long before I let fear descend again. A week and a half later I went to my 8 week ultrasound alone, sitting in the waiting room and visualizing what it would be like to go in and see nothing. I was sweaty, and my voice was about 3 octaves higher than usual. By that point in the trimester, I was also feeling miserable. Throwing up, fatigue, heavy cramping, no energy, battling bronchitis, feeling confused and guilty that I was here and so many women aren’t able to be, just awful. Simply put, I was a mess. I knew it was worth it… if I could see the baby growing.

And, of course, as soon as the ultrasound began, there was baby. Thriving and beating and THERE. More than anything, he or she was THERE. It was as simple as that. The misery was worth it, as long as baby was present.

I’m now 4.5 weeks removed from that day. And finally feeling like a functional human being again. I started turning the corner about 10.5 weeks, and now at 12.5, I can confidently say that I feel like myself again most days. Undoubtedly this was the hardest first trimester of any of my 4. Maybe because I’m also keeping up with an almost-3 year old and almost-1 year old?

I will forever be thankful to a friend for allowing us to borrow her at home Doppler heartbeat monitor. We first tried to find the baby at 9 weeks, David and I both reminding each other that it was probably too early to hear. When we didn’t find it, we both tried not to stress out (HA!), and the next day, at 9w1d, we heard the glorious sound of that heart. I can’t count the number of times I’ve used it since then, stretched out on the couch, just wanting to battle the fear with the sound of triumph.

I’m due June 23, and I can’t even imagine having a summer baby after back to back winter babies. We’ll have 3 under 3.5… a little bonus act to our circus (or side show? I can never decide). We are beside ourselves with excitement, and it still doesn’t feel real. I just keep reminding myself that it is. We’ll found it in a few weeks if baby is a third tiny girly or a brand new little fella, and we can’t wait. Nora Beth thinks it’s a girl named Henry, and Annablair just wants to snuggle. So. Everything has pretty much returned to normal, except our normal will never be the same, and it will just keep getting better.